The work of MCSA scientists is recognized by their peers internationally.
MCSA discoveries frequently make headlines and the covers of prominent publications.

The 2019 MCSA Lifetime Achievement Award was awarded to Dr. Dolly Dastoor for her work in Dementia Care since 1973 when she joined the Douglas Hospital Geriatric Services as a clinical psychologist. She became involved with Alzheimer Research and was one of the founders of the Alzheimer Society of Montreal and then its President and later the Vice – President of the Alzheimer Society of Canada. She developed with Dr. Martin Cole, the Hierarchic Dementia Scale (HDS), and her 1998 Ph.D thesis was on Rate and Predictors of Decline in Dementia of the Alzheimer Type as measured by the HDS.

She was instrumental in developing at Douglas Hospital, the first in Quebec, The Program in Dementia with Psychiatric Co-morbidity which provided a continuum of care model with a Day Centre, Memory Clinic and an 18 bed unit. Dolly was the Clinical Administrator of this program from 1998 until her retirement in 2013.

Mrs. Tatigian is the Medical Secretary at the McGill University Research Centre for Studies in Aging (MCSA) for the past 28 years. During the awards ceremony, she received the 2019 MCSA Service Award. Awarded by Dr. Pedro Rosa-Neto, Dr. Serge Gauthier, and Dr. Paolo Vitali, this award recognized Tamar’s decades- long devoted service to the growth and success of MCSA. Tamar considers it a high privilege to work with the outstanding and diverse MCSA staff. 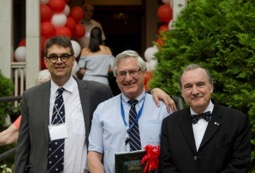 The last award was given to Silvana Aguzzi, Administrative Assistant of the MCSA, for her outstanding contributions to MCSA’s outreach program.

Dr. S. Gauthier presented the 1st Laura Chalk Rowles Lectureship in Dementia Award, to Dr. William E. Klunk on October 15, 2018, in recognition of his outstanding contributions in the field of imaging dementias 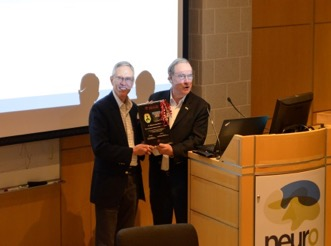 Here is a partial list of honors conferred upon core scientists at the McGill Centre for Studies in Aging: